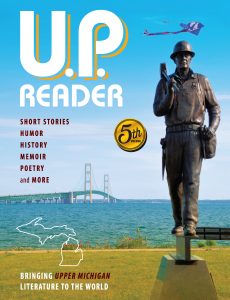 As a member of the Upper Peninsula Publishers & Authors Association (UPPAA), Don Bodey’s work was eligible to be submitted for U.P. Reader Volume #5 which was just released on April 11th, 2021.  UPPAA includes not just residents of Michigan’s Upper Peninsula but writers from all around the Midwest including several in Wisconsin and Minnesota.  Ex-patriated U.P. residents as far away as Texas and California are also members of UPPAA.

Modern History Press, which publishes the U.P. Reader series, is pleased to announce two previously unpublished Don Bodey stories “Deal Me Out” and “How to Hunt Fox Squirrels” are included in this month’s Volume #5.  The book will be available in paperback, hardcover, eBook, and audiobook formats.  The story “Deal Me Out” will be the headliner and titular story of the upcoming Don Body collection Deal Me Out and Other Stories. This collection includes not only short stories but also previously lost interviews and personal correspondence.

This is a unique opportunity to showcase these previously lost episodes from Don Bodey’s writing career.  We look forward to introducing a new generation of readers to Don’s unique brand of ascerbic wit and insight into the human condition.   Additional stories may appear in future volumes of U.P. Reader as well.

This site uses Akismet to reduce spam. Learn how your comment data is processed.